Is this going to be the battle of the year!? I think so! NEW launch from Beautycounter, Think Big All In One Mascara, looks awfully similar to the cult favorite, Thrive Causemetics Lash Extensions mascara. But how to do two fare against one another? As someone who has been very loyal to Thrive for a long time (years before getting into almost exclusively using clean beauty), I’m here to put them to the test and give you all the pros and cons comparing Beautycounter Think Big Mascara to Thrive Causemetics! 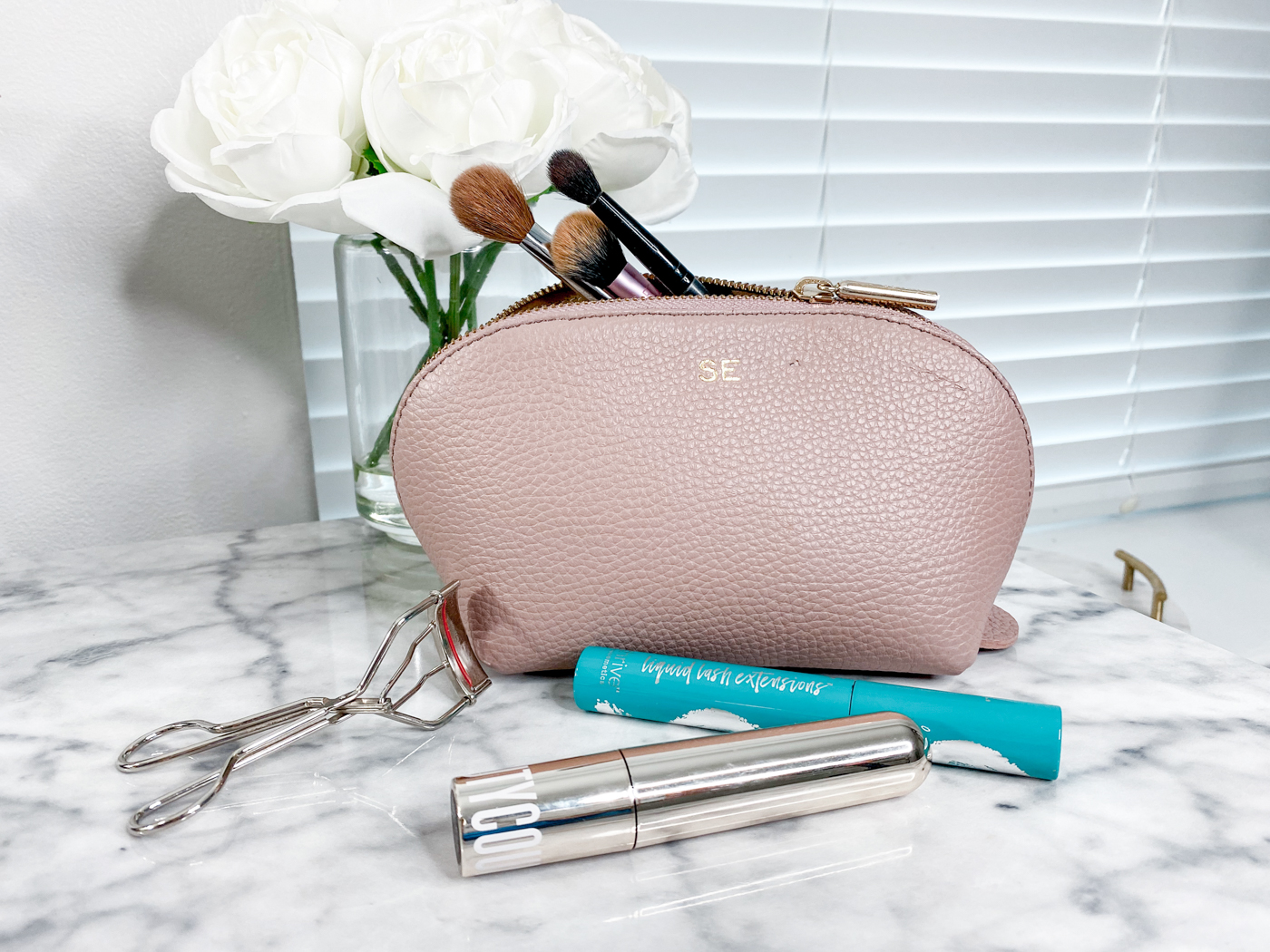 Let’s back it up to when I first blogged about Thrive Causemetics because it was a minute ago – 2018 to be exact… you can check out the blog post here.

I remember saying the mascara was definitely my favorite product from the selection I tried… and years later (2021), it’s been my #1 favorite and most recommended ‘cleaner’ mascara.

In fact, I’ve used Thrive Mascara exclusively for over a year now. So much so, I’m on the auto delivery plan every three months. I do LOVE it very much.

But then Beautycounter heard the cries of consultants nationwide that our mascaras were NOT GOOD ENOUGH.

Disclaimer: I am a Beautycounter consultant. But I have NEVER once in my two years of consultant life, recommended our former mascara to anyone. In fact, I highly discouraged anyone from buying it because I didn’t want them to be disappointed.

Three years in the making, Beautycounter finally released their Think Big All In One Mascara and I was SO excited because it looked exactly like the Thrive wand – which I feel makes such a huge difference in how I mascara performs.

So… before we get too into this comparison, let’s just get the facts out about both formulas/brands… then you can scroll down for the before/after pics since I know that’s what everyone’s going to look for 😉

The biggest difference between the Thrive and Beautycounter mascaras is that Thrive is a TUBING FORMULA.

Many people get very confused by this or simply don’t like it. Many people prefer and LOVE it.

Personally, I do love it for a few reasons we’ll get into later. 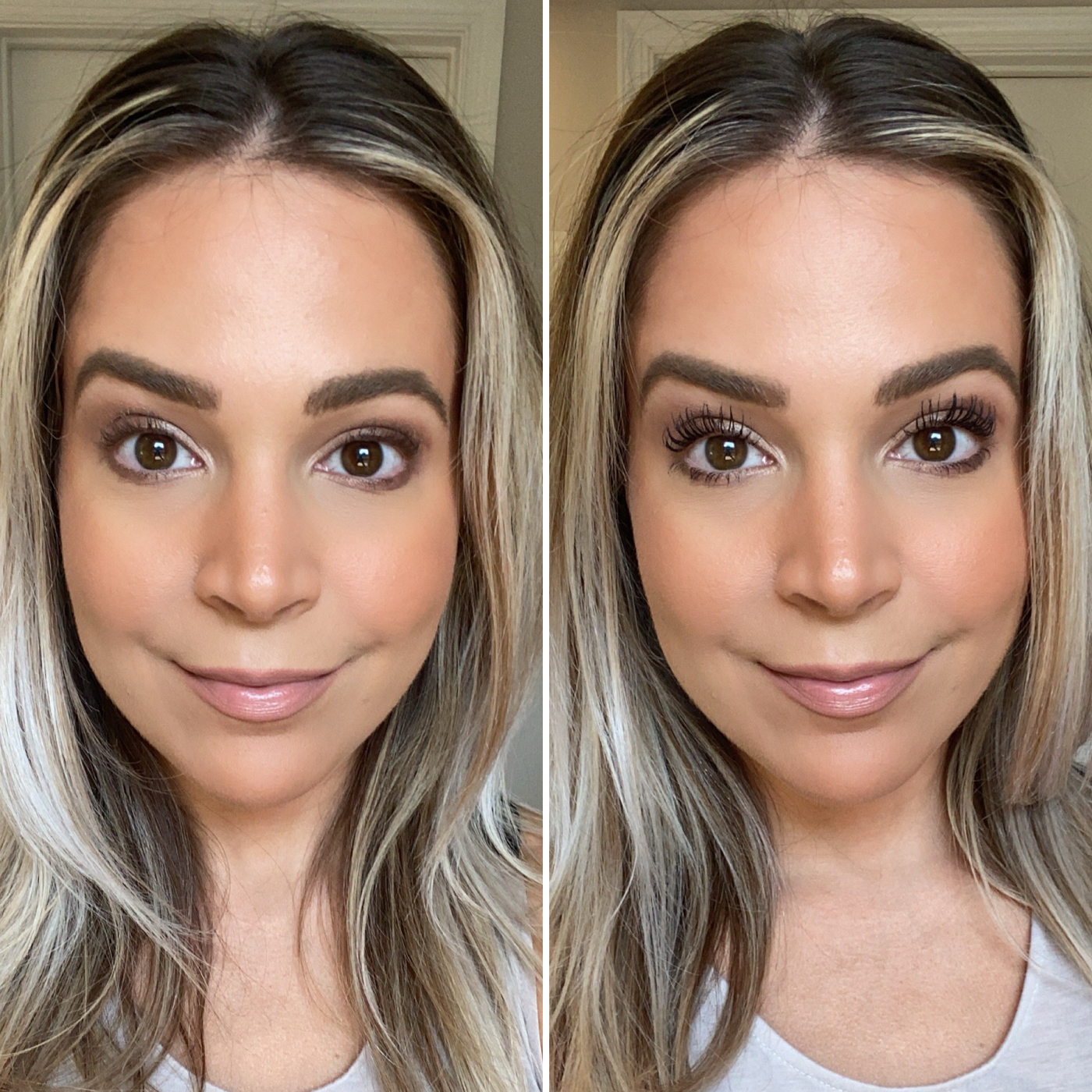 Before / After Thrive Causmetics mascara

What is a tubing formula? A tubing formula coats the lashes in a ‘tube’ of mascara. Imagine each lash hair coated in the mascara and then ‘sealed’ into a film? It’s kind of like that.

The other factor to keep in mind with tubing formulas is how removal feels. When you wash off a tubing formula, it won’t come off with just water. This is good if you plan on splashing around at a pool/lake/beach… but some people want an easy-off removal. Tubing formulas will ONLY remove when combined with a foaming cleanser + water. No cleansing oil or balm will remove a tubing formula.

Once you apply your cleanser and water to your lashes, the tubing formula will immediately start to break down and the little ‘tubes’ of mascara on your lashes will slip right off. You’ll feel the little chunks of tubes as they remove, and some find this satisfying… others hate it.

Thrive says you can also remove with warm water and a washcloth… but I don’t like the idea of rubbing your eyes with a washcloth every day. Sounds like premature aging to me -__-

Besides the tubing aspect, Thrive has a plant stem cell technology to nourish and condition lashes and is ophthalmologist tested. It is also vegan and cruelty free.

Thrive also comes in a plastic/rubber/silicone style wand, as opposed to a traditional bristle wand.

Thrive comes in TWO shades now… they recently expanded to offer both black and brown.

There is 0.38 oz / 10.7 g of product in one tube and it retails for $24 USD. It seems to be only available on Thrive’s website here. My link should get you some $$ off your first purchase, though.

The Beautycounter Think Big All In One Mascara

When Beautycounter was formulating this mascara, there were a few things in mind that they wanted to achieve:

Think Big All In One mascara looks EXTREMELY similar to the Thrive mascara… as they both have the plastic/rubber/silicone style wand. I do prefer these wands for my thick yet light brown lashes because it really grabs each hair, volumizes, lifts and separates.

The difference with Beautycounter’s Think Big vs. Thrive is that Think Big is NOT A TUBING FORMULA.

So if you are someone who just cannot stand the feeling of tubing formulas, or hate the way they remove… then you’ll love this option.

For what it’s worth, I’ve had a lot of people say they also do not like tubing formulas because they ‘feel crunchy/hard’ to them. I can understand this… they do have that seal/coating feeling to them. It doesn’t bother me, but if you prefer a fluffier, softer lash… then you’ll like the Think Big formula better.

Because Think Big is not a tubing formula, the method of removal is much simpler. You can double cleanse with this formula… using whatever combination you like. Or simply wash with your regular cleanser. 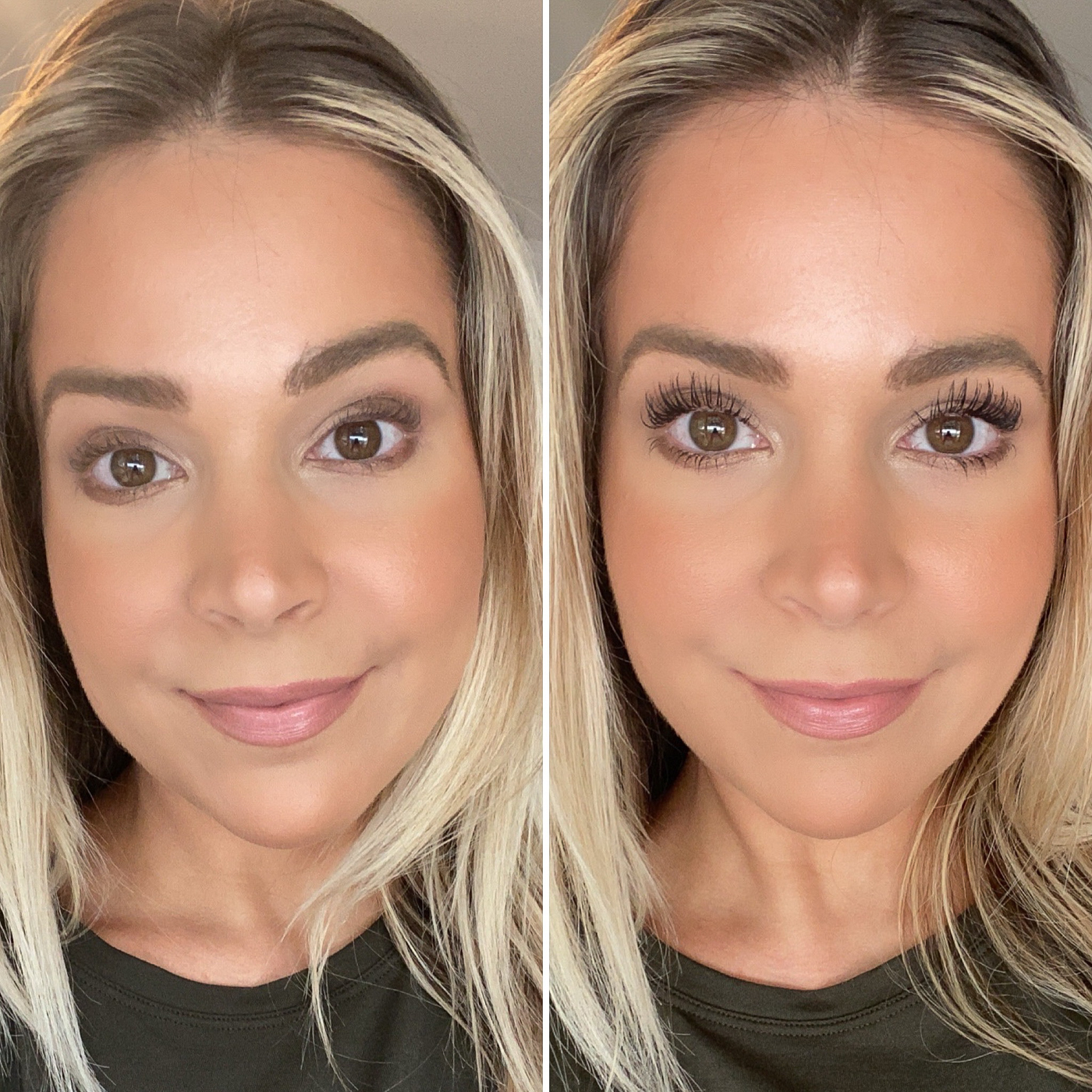 Before / After Beautycounter Think Big mascara

Think Big All In One mascara promises volume, length and intense pigment… as does Thrive. I believe both formulas achieve this well.

As far as safety… it’s as safe as you can get. Think Big mascara is EWG verified.

Think Big mascara is also cruelty free, vegan and ophthalmologist tested. It only comes in black at this time upon initial launch.

Beautycounter’s mascara has slightly less product for a slightly higher price tag… 8ml / .27 fl oz at $27 USD. But, this is CHEAPER and MORE PRODUCT than the former Beautycounter mascara offerings (yay)!

Think Big is only available at Beautycounter.com, or in Beautycounter’s retail locations in Denver, NYC, Venice Beach/Abbot Kinney or on Nantucket during their summertime pop up.

As you can probably tell from the photos… on my eyes, both mascaras look awesome. 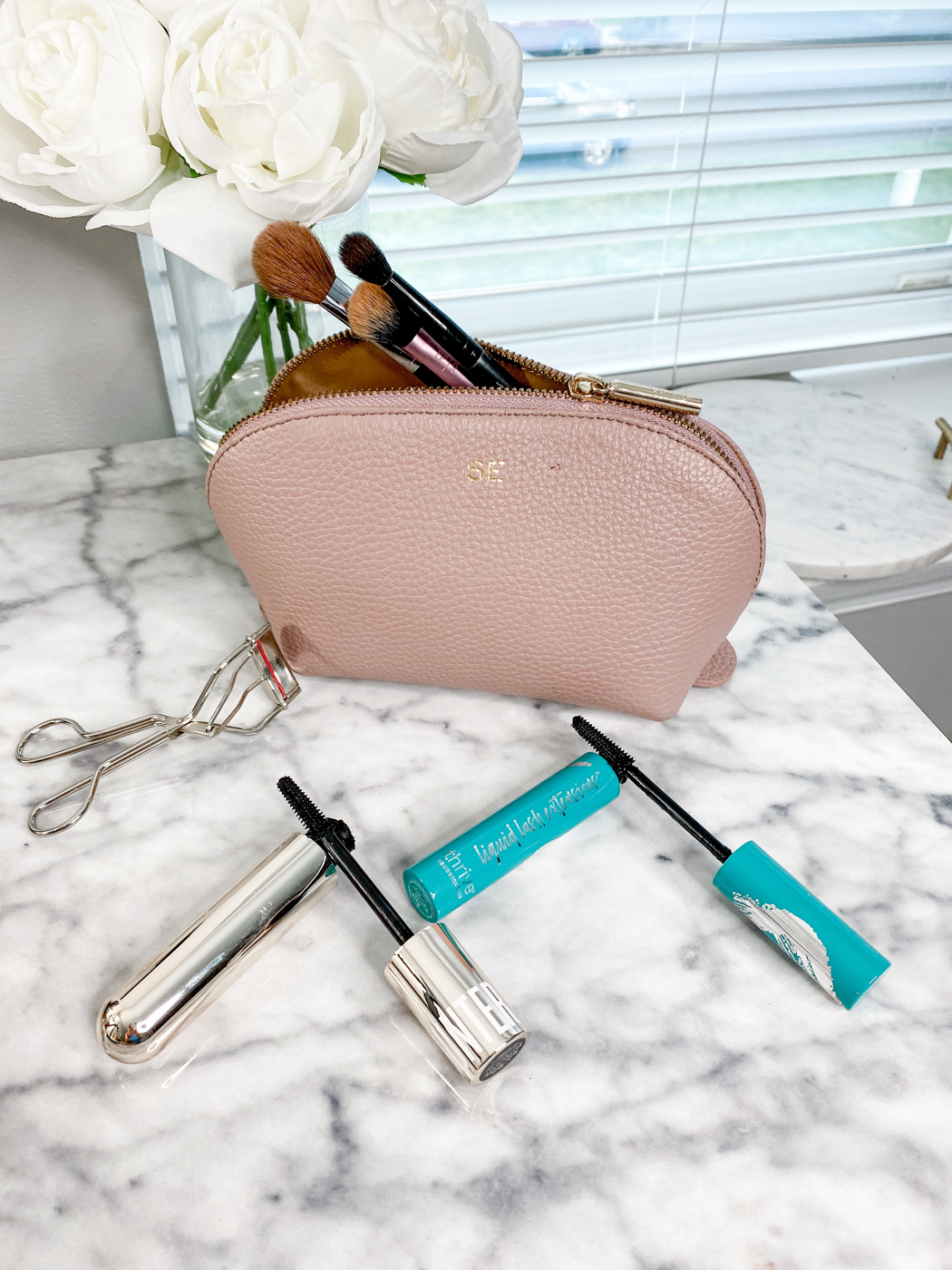 But here’s some pros and cons from my perspective:

Both will give you great length and volume.

Both have lash nourishing ingredients.

Both are safer options to use – albeit, Beautycounter’s is definitely safer.

Both are NOT super affordable for a mascara… $24-27 is not the same as Maybelline… but oftentimes, you do get what you pay for, especially in terms of safety.

My husband and friends both agreed that when I use Beautycounter’s formula, my lashes look longer.

For me… I think I’ll stick with using Thrive in the hot summer months or if I’m on vacation when I know I’ll be around water because I trust a tubing formula to be ‘water resistant’ without being hard to remove/waterproof. I like feeling the chunks of tubes coming off my lashes at night when I wash my face! Maybe I’m a weirdo.

For fall/winter though, I love the clinical studies of the tripeptide technology in the Beautycounter Think Big formula and of course, it’s nice to know I’m using something ultra-safe, when I can.

I hope that helps you decide what formula is best for you! Let me know if you’ve tried the new Beautycounter Think Big All in One Mascara and what you think about it in the comments… or find me on Instagram at @brighterdarling and shoot me a DM 🙂 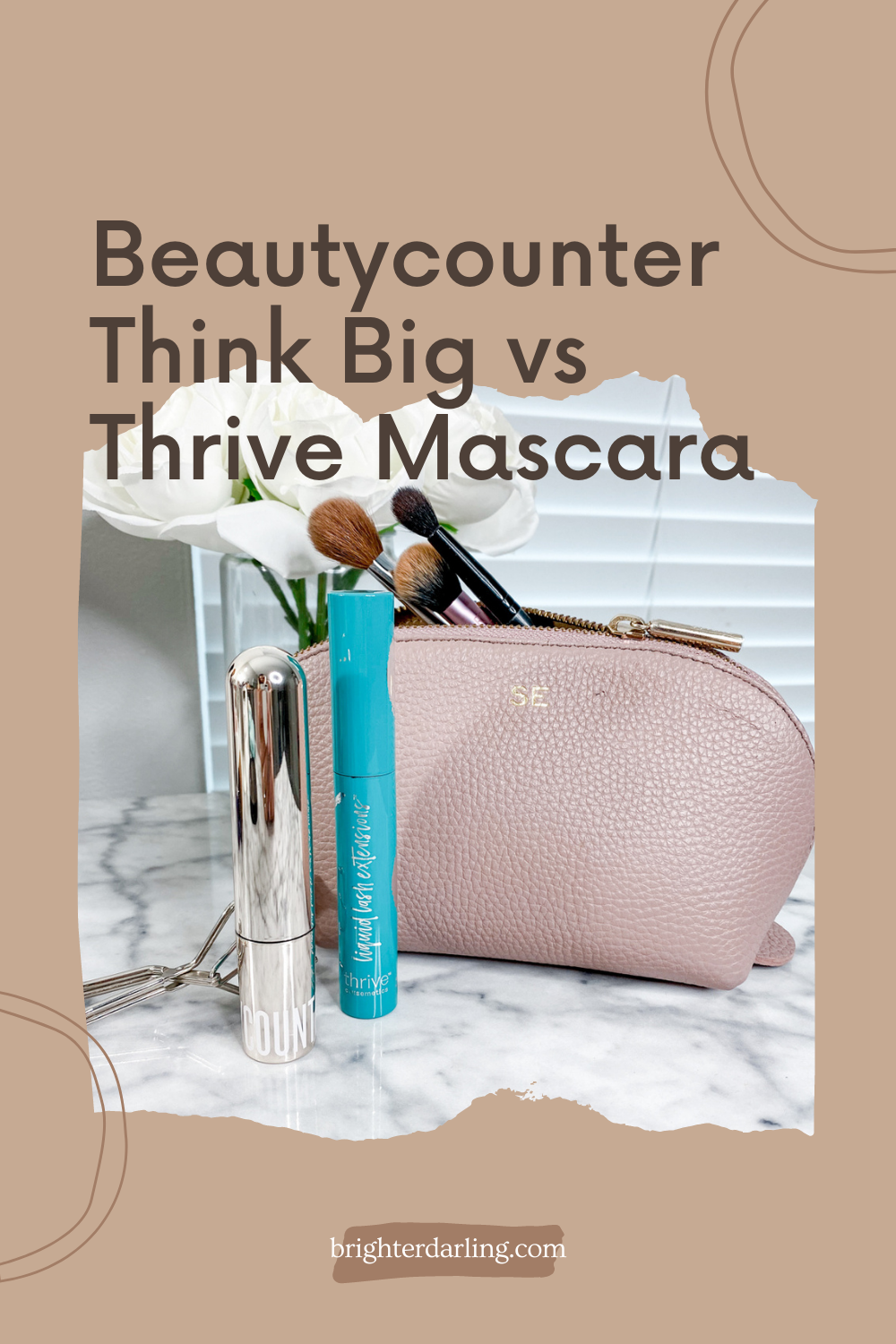 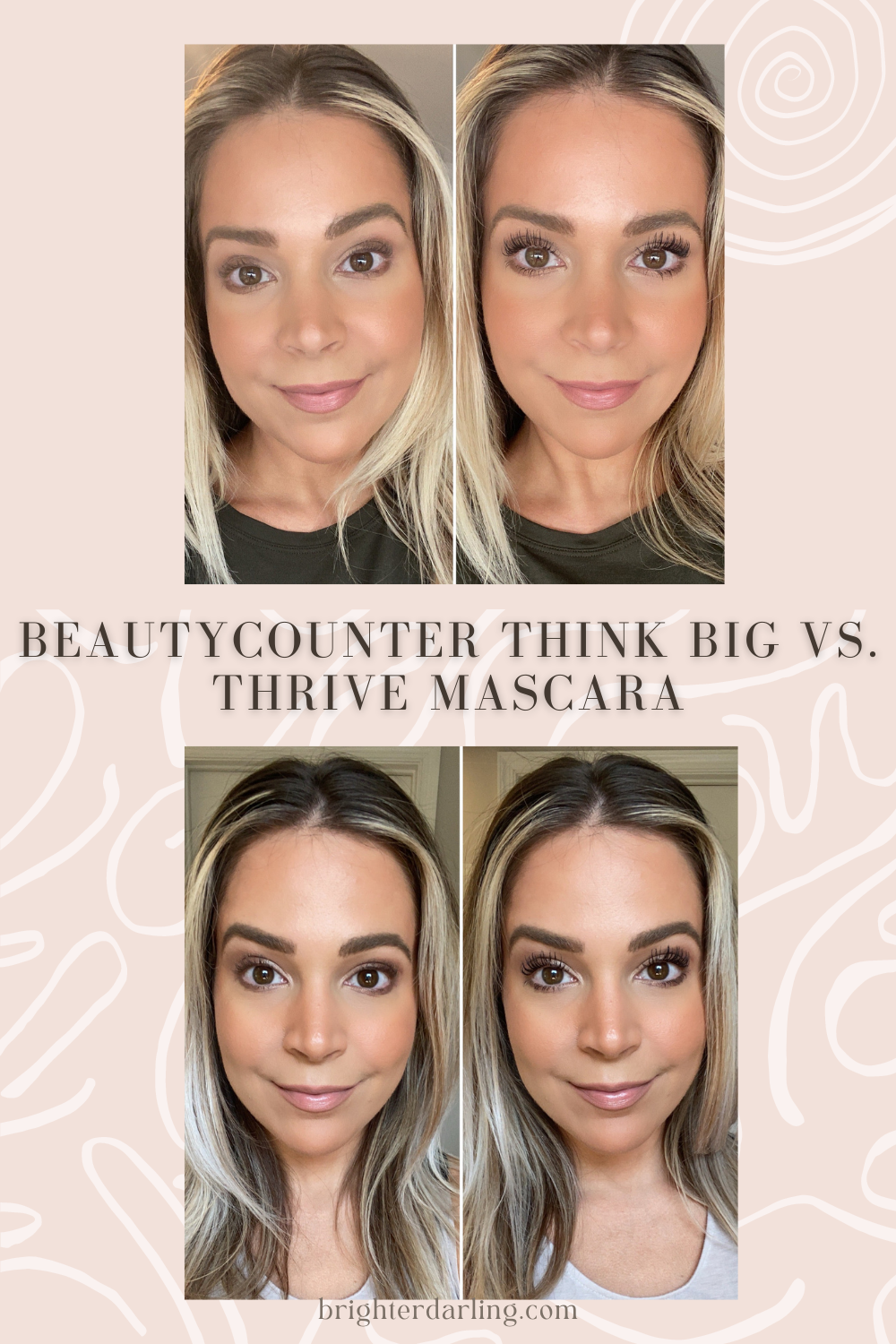