*Affiliate links used. Full disclaimer details here.
First of, let me start out by saying not all babies and bottles are created equal. What worked for your first, may not work for your second. What works for my baby, may not work for yours, etc. What I have learned in this bottle experiment/experience in my first six months as a mother is that there are WAY TOO MANY options out there and it’s overwhelming, expensive and just plain obnoxious. However, with that said, since I basically tried every bottle at Buy Buy Baby (with the exception of possibly 3 I’ll mention), I feel pretty confident in my bottle recommendations today. Let’s get to my thoughts on the best baby bottles 2019… particularly for 0-6 month olds… 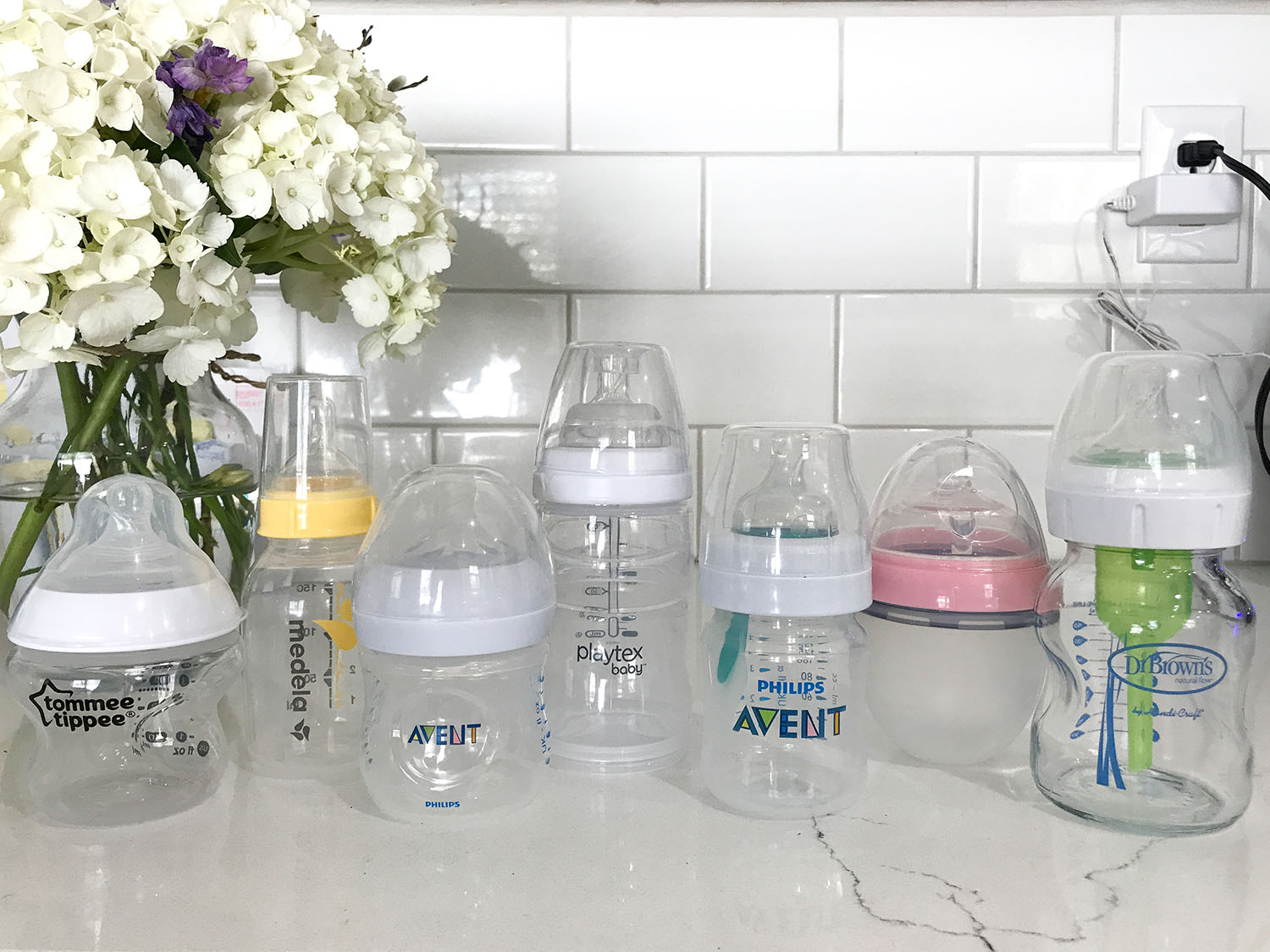 So, to begin, let’s start by checking all of the flows on your bottle nipples. I assumed the ‘free’ bottles I received in registry gifts, gift sets, freebies from Amazon, etc… came with the slowest flows. No. This is not the case. So before your waterboard your baby with a super fast flow nipple like I did and have her gag, check yourself.

You may have to order some of the slowest flow nipples for the bottle(s) you have.

Now that we got that new mom fail out-of-the-way, let’s get to bottles in general. We have two major categories: normal bottles and anti colic/gas bottles. Basically, every bottle claims to have some sort of anti colic/gas feature, but I’ll tell you right now, that’s a load of BS. Personally, I did find that bottles with bulkier inserts/vents (Dr. Browns, Avent Anti Colic) did work better in terms of gas. There’s an exception to this, though (enter: Playtex Drop In Nursers).

Lastly, the nipples in general. They all claim to mimic the breast. Whatever. That’s quite interesting considering everyone’s boobs are different. So my nips aren’t like yours, etc. How do these companies think these nipples are mimicking EVERY WOMAN’S BREAST!? So just take that with a grain of salt when you’re picking out a bottle. There’s wide neck and standard neck bottles, too. If you really want to be particular about the nipple, think about your own anatomy and maybe find a nipple that most resembles your particular nips. One exists. I promise. There’s about 12324 options on the market. However, I don’t really think this is a necessity. Baby will tell you which bottle she likes.

I’m going to go through the pros and cons of all the bottles I tried and which I ended up using the most.

FWIW, I breastfeed, pumped, supplemented and bottle fed for the first four months. Baby went back and forth from breast to bottle(s) with no issues.

The Tommee Tippee Closer to Nature bottle was the first bottle I tried when I began pumping/supplementing and #FirstTimeMom problems was in full force here. I had received this bottle for free from Destination Maternity as a gift when I first got pregnant, but stupidly, they didn’t include the slowest flow nipple on the bottle. MAJOR FAIL if you want to capitalize on all new moms out there.

Anyway, so I basically waterboarded my baby since she was about a week and a half old at this point and the flow was so fast she couldn’t handle it.

Besides that, I really hated that the shape of this bottle made a little bit of milk/formula stuck in the upper rim. As anyone who struggles to produce enough breast milk knows, that stuff is liquid gold and it bothered me that I wasn’t getting every last ounce out of the bottle. On to the next one. 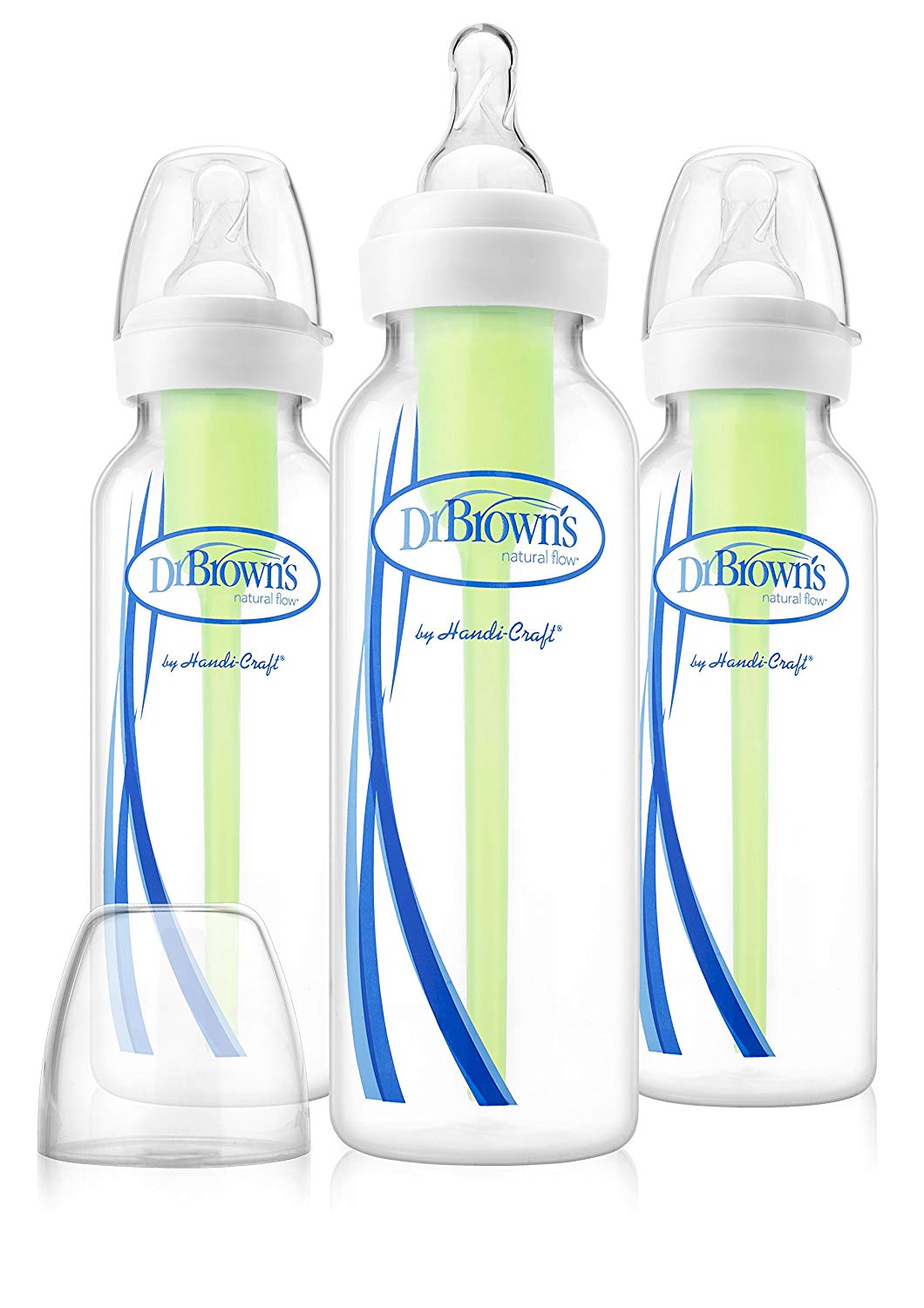 image c/o Amazon; I gave away these bottles

The next day, we tried the Dr. Brown’s Options Standard Neck bottle and two things occured:

Besides those two key points, I personally didn’t like the shape of the standard flow nipple since I was still going back and forth with breastfeeding her and feeding her a bottle. The standard nipple does not look and feel like a real nipple to me, compared to the dozens of wider neck/wider nipple options on the market. So these, I was glad to pass on.

After seeing two bottles fail for me, my mom said to just go to the old school Playtex nurser because it’s what worked for my very colic-y baby self. We picked up a box of these bottles and liners and, thankfully, this set actually includes the slowest flow nipple.

My baby took to these instantly and barely any milk/formula was left since the liners collapse as baby sucks/drinks, so every last drop is accounted for.

The nipple shape also mimics the breast and I had no issues going back and forth with these bottles and breastfeeding.

Cons include the amount of waste you have because the liners are disposable.

Pros include that they’re very travel friendly and less clutter on your countertops because you don’t need a ton of actual bottles – you just pop on the ring and nipple to the bottle and slide in a new liner when feeding.

We used these nearly exclusively until Savannah was about 3.5 months old. 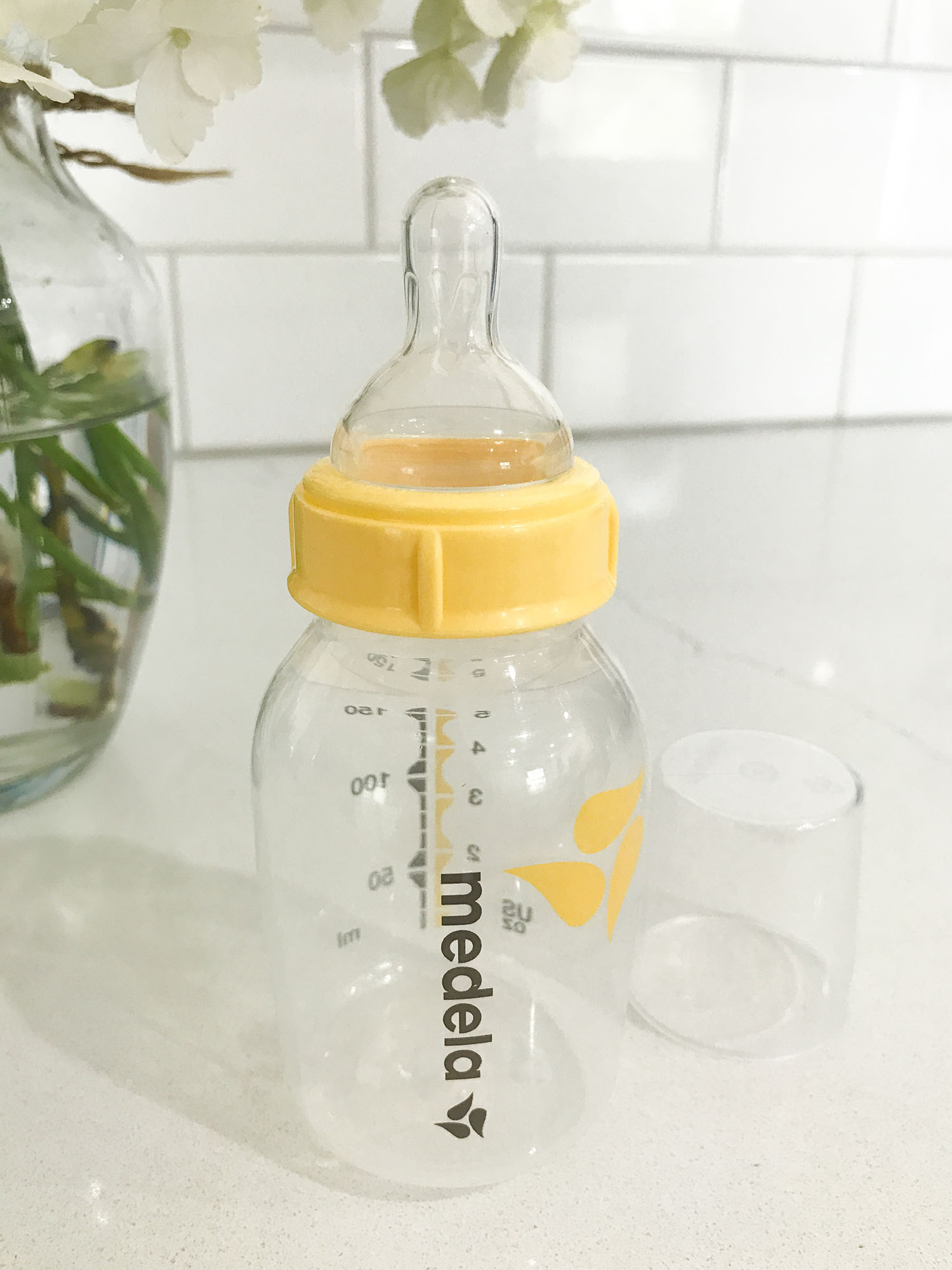 I used the Medela Pump in Style Advanced and somehow got a few of these Medela bottles along the way. There were a couple of times it was just easier to use these when we were traveling/visiting family.

Although they have the traditional, standard nipple and neck shape and don’t claim to have any fancy anti colic features, my baby had no issues with gas or flow on these when used in a pinch.

Once Savannah was about 3.5 months old, it started to take her over an hour to finish a bottle. NOT OK. Once your baby is taking longer than 20 minutes to finish a bottle, it’s time to increase the speed of the nipple flow.

Unfortunately, I couldn’t just ‘size up’ to the faster flow in the Playtex Nursers. Flow 2 was way too fast still.

Yes, I was told to just use a pin and add one or two small holes to the Flow 1 nipples, but to be honest, the nipples were already looking a bit rough and you’re supposed to replace them every three months anyways, so I just wanted to find new bottles that would work for her.

Then I took a poll from friends online and so many recommended the Avent bottles. So we bought both the Avent Naturals and the Avent Anti-Colic. 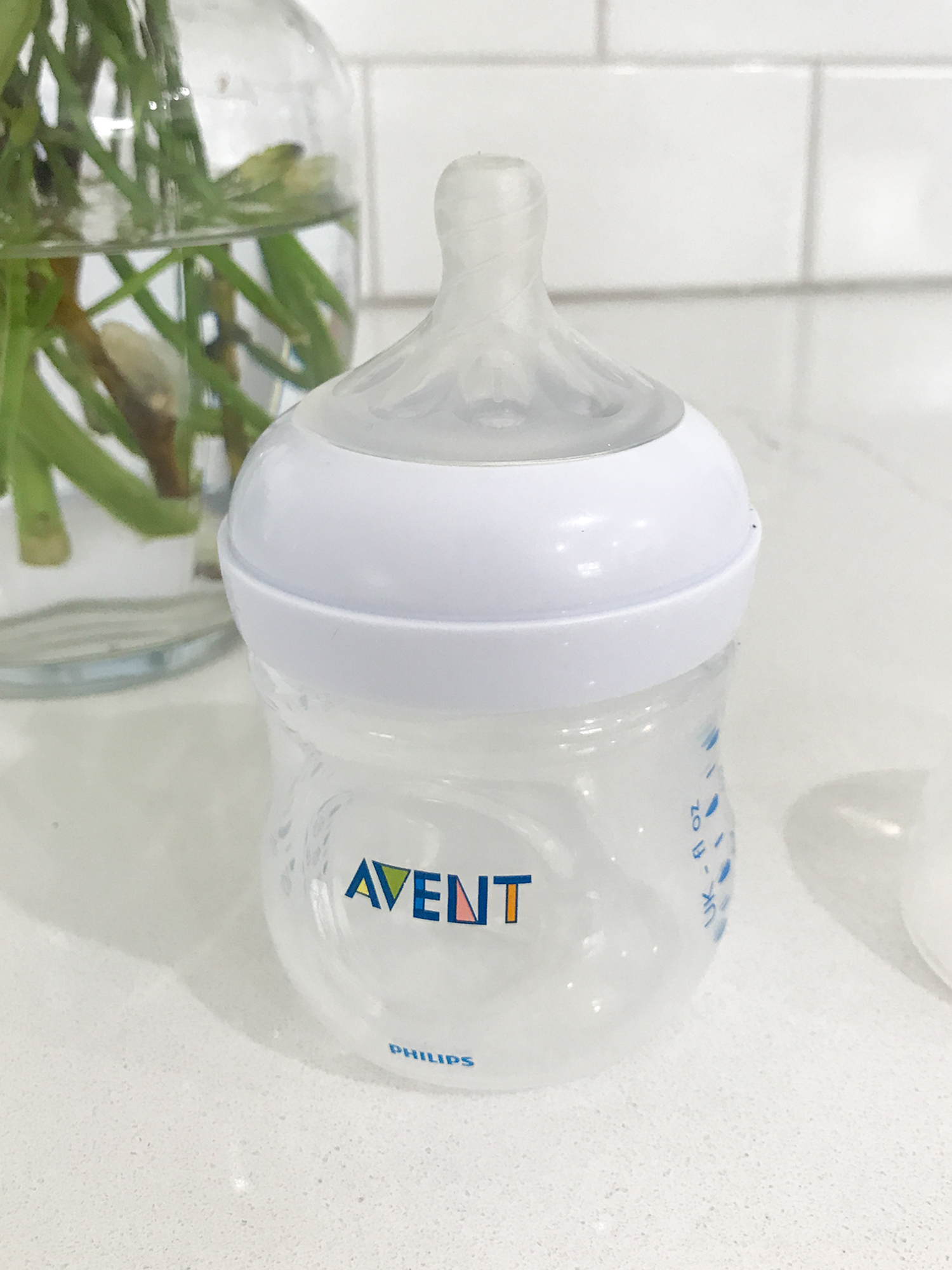 First of all, the Avent Natural bottles are definitely one of the softest nipples on the market. If you want something that really feels like a real boob, I recommend trying these out unless you have a very gassy baby.

Although they do leave a little milk/formula in the top rim of the bottle, it wasn’t as bad as Tommee Tippee.

My issue with these was that after about 2-3 days, Savannah got very bad gas. Even though these claim to have anti colic vents, it just wasnt enough for us. 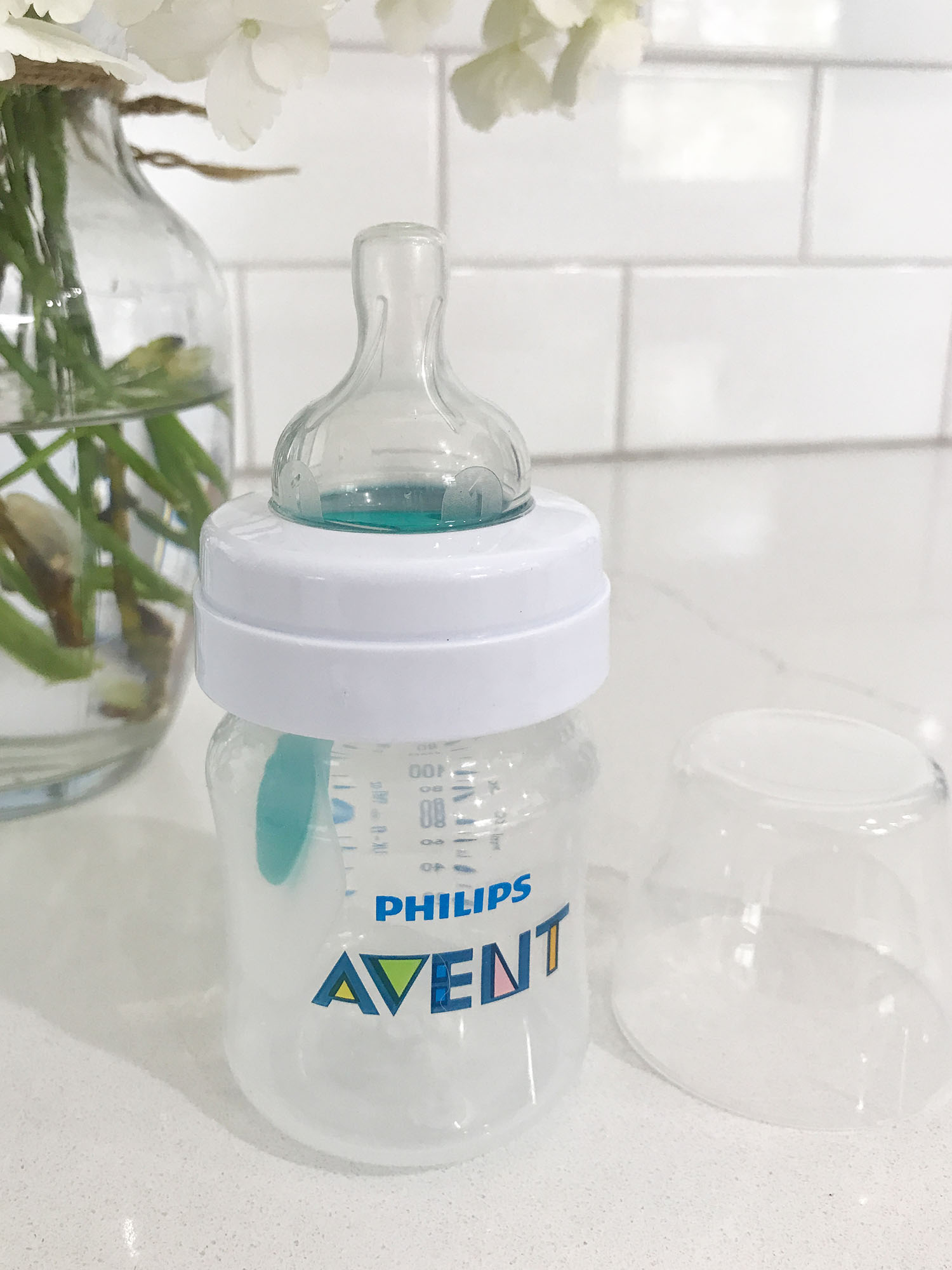 The nipple on the Avent Anti-Colic bottle is hard. And strangely squared off at the top. I really didn’t like that, but the recommendation to use these came from a friend’s pediatrician whose baby is colic-y, so I tried to like them.

These have a special ring/vent in the bottle similar to Dr. Brown’s but instead of being 2 pieces, it’s only one.

As far as gassiness goes, we had no issues with these.

As far as milk left in the bottle goes, we had small issues with these, but again, not as bad as Tommee Tippee.

I just couldn’t get over how hard the nipple was on these so we ultimately moved on. 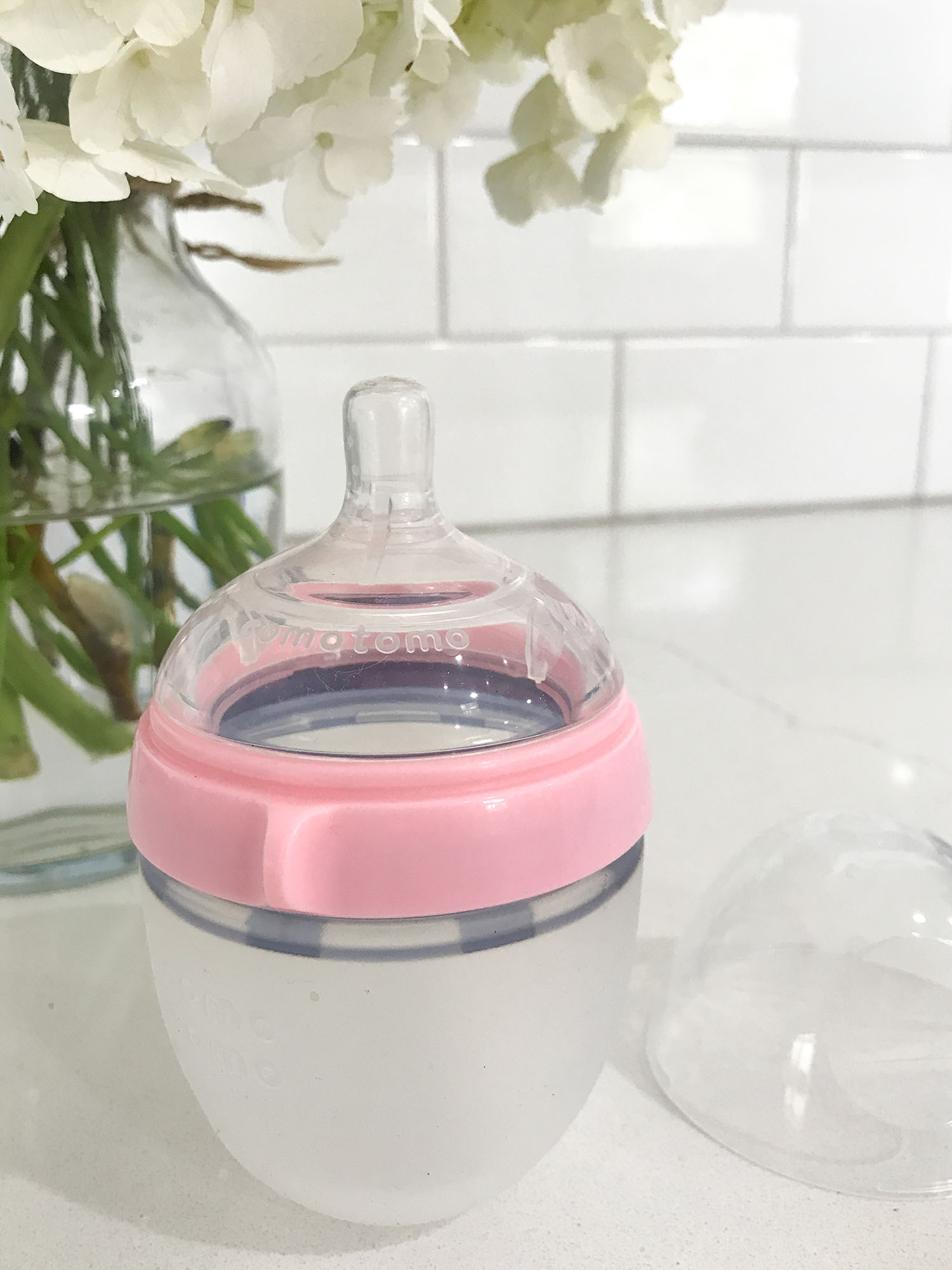 The Escalade of baby bottles… Como Tomo. These are probably the priciest bottle and claim to be most similar to the boob because the nipple is soft and wide and the bottle itself is squishy silicone.

However, baby girl got BAD GAS with these, too… even using the slowest flow. Second to the Dr. Brown’s standard neck. I was so sad about this loss, haha. I had similar happen to several friends trying out bottles around the same time as me, so go figure. 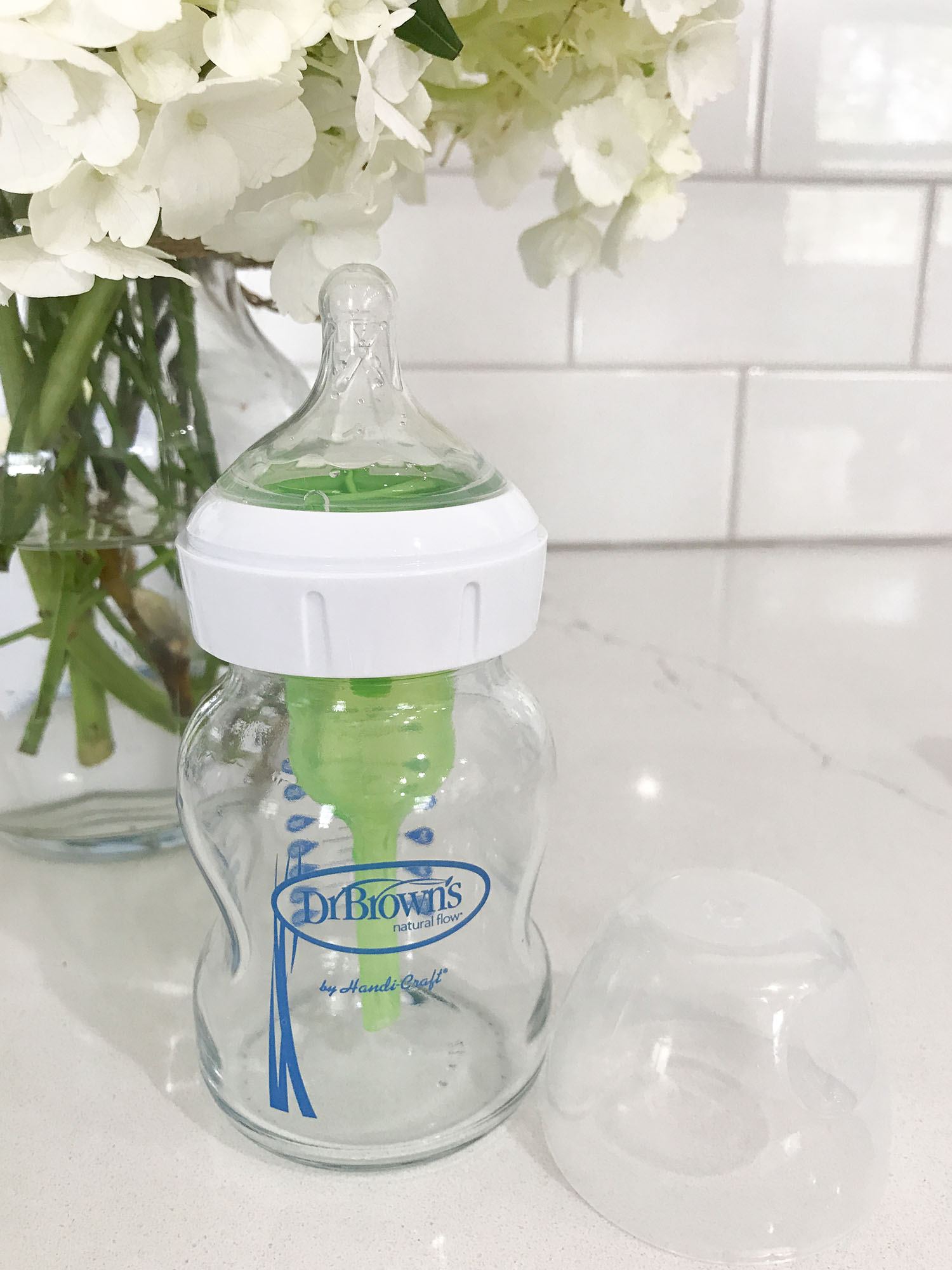 My mom tribe was INSISTING to go back to Dr. Brown’s. They all had luck with them and they wanted me to try the new Dr. Brown’s wide neck (glass; plastic here) instead, since I think baby girl latches better with those style bottles.

Dr. Brown’s also just redesigned the wide neck nipples to be more breast-like, which was much-needed.

The new wide neck nipples are just that… wide, and VERY soft. Almost softer than Como Tomo and Avent Naturals.

They include the anti colic two piece venting system, like most Dr. Brown’s bottles, so it is a lot to clean, but not going to really make a huge difference in time-saving.

I picked up a two pack of these new Dr. Brown’s Options+ wide neck bottles with their level 1 flow nipple. We used these for 5 days before deciding these were her new favorite after all!

I purchased these in glass, which are the first glass bottles we’ve used, and I really like them. I’ve had no breaking and I find they seem cleaner after continued washes.

Savannah is now six months old and we’re still a-ok using the level 1 nipple on these bottles. She finishes her bottle in 10-15 minutes and I truly hope when it’s time to up the nipple flow, we can use these still!

One annoying con:  you cannot mix up formula in these bottles. They come with a disc that is supposed to seal off the bottle (it goes in the ring in place of the nipple), but there is no seal and formula leaks everywhere! I end up having to mix formula in a Medela bottle or in the Dr. Brown’s bottle with just the nipple, but that is annoying if I have to make more than 5 oz since I don’t have the 9 oz bottle yet. Since this newly remodeled bottle is, in fact, new, I hope they make traditional, normal sealable lids for these bottles so I can just mix up formula without using two bottles.

bottles I didn’t try yet but would

For the mom who is having great luck breastfeeding… check out reviews on the Kiinde system.

For the mom who goes back and forth breastfeeding and pumping and has a baby older than 3 months… check out the Joovy Boob.

For the mom who really wants a bottle nipple that resembles the shape of what a real boob does when baby is feeding… check out the MAM bottles (they have a flatter nipple).

I hope this post was helpful to someone out there.

Remember, all babies and bottles are so unique and different. It can take trial and error to find the perfect bottle.

My biggest recommendation? Do not register for gift sets of bottles. Register for singles of a couple different ones (or just two packs… whatever the smallest amount of bottles that brand makes) and make sure you have the slowest flow they make if you’re going to be a new mom.

Thanks for stopping by! 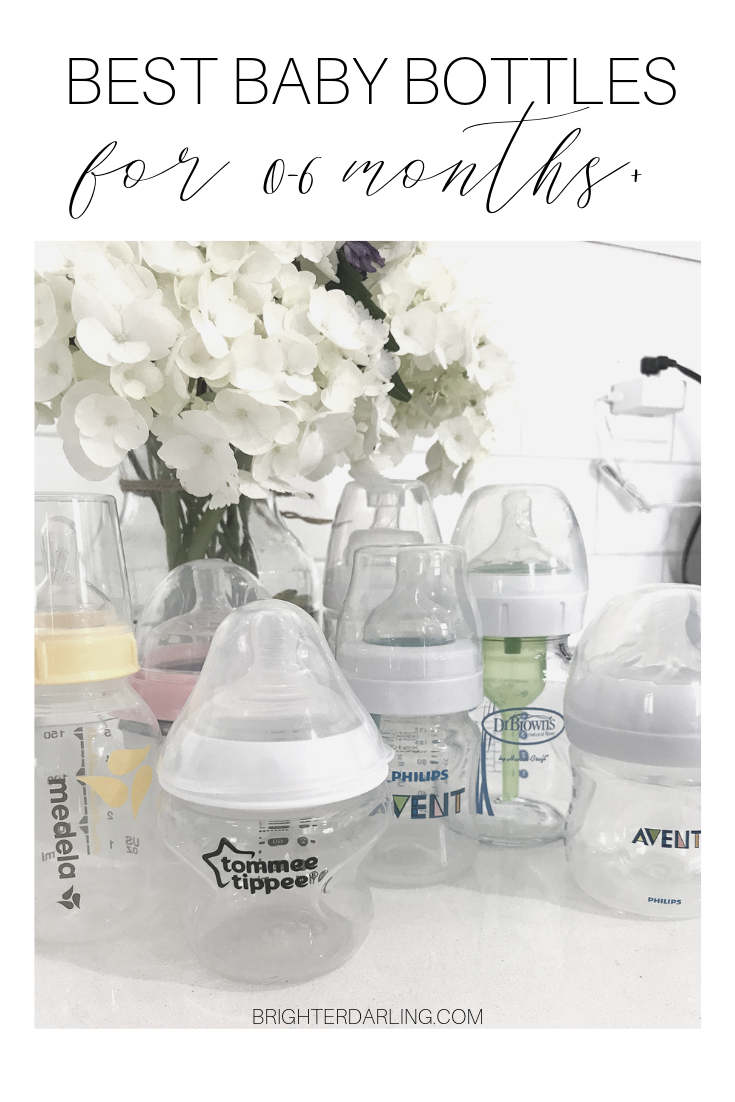 Getting In Shape After Pregnancy C-Section Edition